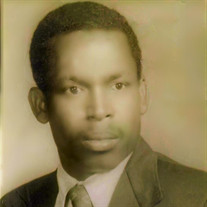 Pastor Job Louis-Pierre was born on April 12, 1941, in Marchant-Dessalines, Haiti. He was born to mother Orzelie Beauzier and father Youte Louis-Pierre. He had 14 siblings, including Silta Louis-Pierre, Bruny Louis-Pierre, Leoderne Pierre, Wilfride Youte, Francis Louis-Pierre, Youte Jr Louis-Pierre, Fleuoncia Gelin and Yniace Louis-Pierre. He was married to Mercilise Morisset, until her passing in August 2009, and together had eight Louis-Pierre children: Judson, Wesley, Jude, Juline, Phoebe, Suze, Alden and Wally. At an early age, he accepted Jesus Christ as his LORD and Savior. Becoming born-again paved the path to him attending a bible college in Haiti, after which he became an ordained pastor in his early 20s. Shortly thereafter, he joined an American missionary group stationed in Haiti. In 1973, through his works with the missionary group, he was able to travel to the United States. Sometime after his arrival to the US, he founded Jesus Christ Baptist church in the late 1970s. He would eventually rent a church on East Grand Street in Elizabeth, NJ, as a place of worship. In the early 1990s, he and the congregation went from renting the church in Elizabeth to building their own place of worship in Roselle, NJ, which still stands today. Pastor Job Louis-Pierre was a devout man of faith. He devoted most of his life to the church and to tirelessly doing God’s work; a span of over 50 years. He was also a musician. He loved playing his accordion and using his numerous music books to teach the choir. He not only played the accordion; he also played the piano. Lastly, he is a perfect embodiment of the American Dream. While tending to the tremendous responsibility of the church and raising his children, he was also employed by Trinity Paper in Elizabeth, NJ, for a better part of 30 years, until his retirement. He was also a business owner, having opened a dry-cleaning business with his late wife in a commercial property he owned in Linden, NJ. He was a kind man whom everybody loved, especially the church. The closeness of his church family was incredibly important to him; this was reflected in how members of the church cared for him and tended to him. He provided for all his children from birth to adulthood and instilled in them a strong, spiritual base that has always and will continue to serve them well. He loved watching wrestling and certain movies, such as The Princess Bride, The Thief of Bagdad, Mighty Joe Young and the Home Alone series. On January 20, 2022, Pastor Job Louis-Pierre was called home. He’s in God’s hand now. He is survived by the following offspring and relatives: • Five children: Wesley Louis-Pierre, Phoebe Surles, Suze Lewis, Alden Louis-Pierre and Wally Louis-Pierre. • Three daughters-in-law: Nadeige Louis-Pierre, Erica Louis-Pierre and Nicole Louis-Pierre. • One son-in-law: James Surles. • Sixteen grandchildren: Nathan, Alec, Darnell, Pernell, Jeremiah; Jassina, James Phillip, Jai; Sherline; Naomi, Abigail, Alden Jr; Wally Jr., Elaina, Joel, Laylah. • One great grandchild: Xavier Surles. • Two siblings: One older brother, Silta Louis-Pierre, one younger sister, Fleuoncia Gelin. • A multitude of nephews and nieces, including Lucie Augustin who was always near him. Viewing Service Live-Stream - FEB 4, 6PM - 8PM: https://youtu.be/uqe3xLXmSiA Funeral Service Live-Stream - FEB 5, 8 AM - 10:30 AM: https://youtu.be/NEMmwOEEDTM

A comforting word from you means a lot.

Send flowers to the Louis-Pierre family.