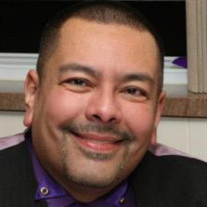 Luis A. Delgado "Lou" 56, from Elizabeth, New Jersey passed away on September 13, 2020. He was born to parents Luis and Hortensia Delgado, on August 14, 1964 in Elizabeth, New Jersey where him and his loving sister Sonia grew up. Luis graduated from St. Patrick's High School and received Computer Programming Certificates from several Trade schools. Luis was known for his generosity and huge heart. He spent his free time mentoring children in his community as a baseball and basketball coach. Sought after by friends, family, and the community for guidance and his no-nonsense advice. He married Carmen, the love of his life, in 1994, who survives him. Luis is also survived by sons Luis, Tony, Javi, Paul and daughters Jazmin and Wanda, his nephew Bobby, his nieces Cathy and Stephanie, as well as a host of grandchildren. Luis' love extends beyond immediate family, his house was always open for anyone to lay their head and rest. His food was your food, his television was yours to watch (unless his Oakland Raiders were on, then you would have to watch the game and listen as he boisterously roots for his team). Luis (self entitled Ice Man) was known for his love of all sports. A passionate fan of the Oakland Raiders, Philadelphia 76ers, both the Philadelphia Phillies and Milwaukee Brewers, Philadelphia Flyers, Nebraska Cornhuskers, and Louisville Cardinals. Luis was known as a walking sports encyclopedia, vividly reciting statistical information rapidly and accurately, welcoming any debates. The memorial service/visitation will be held on Wednesday 16, 2020, from 5-8pm at Gorny & Gorny Funeral Home. Due to Covid guidelines only 25 personnel will be allowed to remain in the building. Everyone and anyone is welcome and the family will ensure that you receive adequate time to pay your respects.

The family of Luis A Delgado created this Life Tributes page to make it easy to share your memories.

Luis A. Delgado &quot;Lou&quot; 56, from Elizabeth, New Jersey passed away...

A comforting word from you means a lot.

Send flowers to the Delgado family.